Today, we will see a couple of practical implementations of online mirror descent, with two different Bregman functions and we will introduce the setting of Learning with Expert Advice. 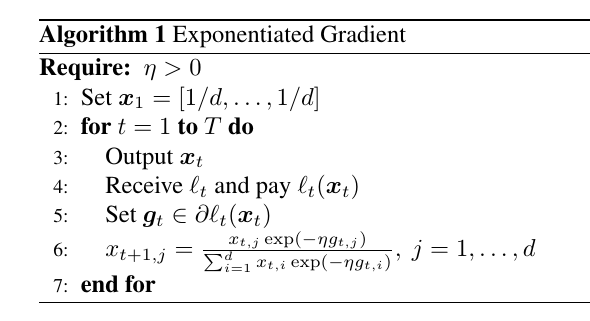 defined as the negative entropy

. Also, we set the feasibility set

. So, in words, we want to output discrete probability distributions over

Putting all together, we have the online mirror descent update rule for entropic distance generating function.

The algorithm is summarized in Algorithm 1. This algorithm is called Exponentiated Gradient (EG) because in the update rule we take the component-wise exponent of the gradient vector.

Let’s take a look at the regret bound we get. First, as we said, observe that

that is the KL divergence between the 1-dimensional discrete distributions

. Now, the following Lemma tells us about the strong convexity of

is 1-strongly convex with respect to the

norm over the set

Another thing to decide is the initial point

to be the minimizer of

Putting all together, we have

Remark 1 Note that the time-varying version of OMD with entropic distance generating function would give rise to a vacuous bound, can you see why? We will see how FTRL overcomes this issue using a time-varying regularizer rather than a time-varying learning rate.

How would Online Subgradient Descent (OSD) work on the same problem? First, it is important to realize that nothing prevents us to use OSD on this problem. We just have to implement the euclidean projection onto the simplex. The regret bound we would get from OSD is

, we have that in the worst case

. Hence, in a worst case sense, using an entropic distance generating function transforms a dependency on the dimension from

for Online Convex Optimization (OCO) over the probability simplex.

So, as we already saw analyzing AdaGrad, the shape of the domain is the important ingredient when we change from euclidean norms to other norms.

. Let's remind the reader that the

-norm of a vector

. We already proved that

. Hence, we can write the update rule as

where we broke the update in two steps to simplify the notation (and the implementation). Starting from

The last ingredient is the fact that

strongly convex with respect to

-strongly convex with respect to

Hence, the regret bound will be

, we get the (unprojected) Online Subgradient Descent. However, we can set

to achieve a logarithmic dependency in the dimension

as in EG. Let’s assume again that

, so we have an upper bound to the regret of

, we get an upper bound to the regret of

that minimizes the last term is

that makes the term

. Hence, we have regret bound of the order of

should be tuned with the knowledge of

, that is impossible given the adversarial nature of the game. We will see how to solve this issue when we will introduce the parameter-free algorithms.

-norm allows to interpolate from the behaviour of OSD to the one of EG. Note that here the set

is the entire space, however we could still set

. While this would allow us to get the same asymptotic bound of EG, the update would not be in a closed form anymore.

In this setting, we have

experts that gives us some advice on each round. In turn, in each round we have to decide which expert we want to follow. After we made our choice, the losses associated to each expert are revealed and we pay the loss associated to the expert we picked. The aim of the game is to minimize the losses we make compared to cumulative losses of the best expert. This is a general setting that allows to model many interesting cases. For example, we have a number of different online learning algorithms and we would like to close to the best among them.

. On the other hand, the best cumulative loss over expert 1 and 2 is less than

. This means that our regret, no matter what we do, can be as big as

The problem above is due to the fact that the adversary has too much power. One way to reduce its power is using randomization. We can allow the algorithm to be randomized and force the adversary to decide the losses at time

First, let’s write the problem in the original formulation. We set a discrete feasible set

is the vector will all zeros but a

. Our predictions and the competitor are from

. The losses are linear losses:

The only thing that makes this problem non-convex is the feasibility set, that is clearly a non-convex one.

Let’s now see how the randomization makes this problem convex. Let’s extend the feasible set to

. For this problem we can use an OCO algorithm to minimize the regret

Can we find a way to transform an upper bound to this regret to the one we care in (1)? One way is the following one: On each time step, construct a random variable

that is equal to

. Then, select the expert according to the outcome of

. Now, in expectation we have

This means that we can minimize in expectation the non-convex regret with a randomized OCO algorithm. We can summarize this reasoning in Algorithm 2.

For example, if we use EG as the OCO algorithm, setting

, then we obtain the following update rule

and the regret will be

It is worth stressing the importance of the result just obtained: We can design an algorithm that in expectation is close to the best expert in a set, paying only a logarithmic penalty in the size of the set.

In the future, we will see algorithms that achieve even the better regret guarantee of

in the simplex. You should be able to convince yourself that no setting of

in EG allows to achieve such regret guarantee. Indeed, the algorithm will be based on a very different strategy.

The EG algorithm was introduced by (Kivinen, J. and Warmuth, M., 1997), but not as a specific instantiation of OMD. Beck and Teboulle (2003) rediscover EG for the offline case as an example of Mirror Descent. Later, Cesa-Bianchi and Lugosi (2006) show that EG is just an instantiation of OMD.
The trick to set

is from (Gentile, C. and Littlestone, N., 1999) (online learning) and apparently rediscovered in (Ben-Tal, A. and Margalit, T. and Nemirovski, A., 2001) (optimization). The learning with expert setting was introduced in (Littlestone, N. and Warmuth, M. K., 1994) and (Vovk, V. G, 1990). The ideas in Algorithm 3 are based on the Multiplicative Weights algorithm (Littlestone, N. and Warmuth, M. K., 1994) and the Hedge algorithm (Freund, Y. and Schapire, R. E., 1997). By now, the literature on learning with expert is huge, with tons of variations over algorithms and settings.

in the probability simplex.

Here we find the conjugate of the negative entropy.

The KKT conditions are, for

From the first one we get

. Using the third one we have

. Then, from the complementarity condition, fourth one, we get

. Putting all together, we have

, and substituting in the definition of the conjugate function we get 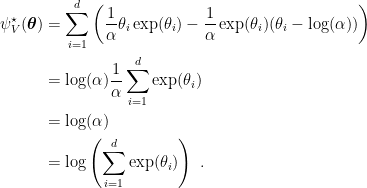