In this blog (and in our ICML 2020 tutorial) we have often discussed the issue of how to tune learning rates in Stochastic (sub)Gradient Descent (SGD). This issue is delicate and sometimes a student might not realize its complexity due to the use of the simplifying assumption of bounded domains.

Don’t get me wrong: assuming bounded domains is perfectly fine and justified most of the time. However, sometimes it is unnecessary and it might also obscure critical issues in the analysis, as in this case. So, to balance the universe of first-order methods, I decided to show how to easily prove the convergence of the iterates in SGD, even in unbounded domains.

Technically speaking, the following result might be new, but definitely not worth a fight with Reviewer 2 to publish it somewhere.

First, let’s define our setting. We want to solve the following optimization problem

is a convex function. Now, various assumptions are possible on

and choosing the right one depends on your particular problem, there are not right answers. Here, we will not make any strong assumption on

. Also, we will not assume

to be bounded. Indeed, in most of the modern applications in Machine Learning,

is simply the entire space

. We will also assume that

is not empty and

is any element in it.

. In formulas, we get

Here, for didactic reasons, we will assume that

is bounded by 1; similar results can be also show with more realistic assumptions. This holds, for example, if

is an average of 1-Lipschitz functions and you draw some of them to calculate the stochastic subgradient.

The algorithm we want to focus on is SGD. So, what is SGD? SGD is an incredibly simple optimization algorithm, almost primitive. Indeed, part of its fame depends critically on its simplicity. Basically, you start from a certain

and you update your solution iteratively moving in the direction of the negative stochastic subgradients, multiplied by a learning rate

. We also use a projection onto

no projection is needed. So, the update of SGD is

is the projection onto

2. Convergence of the Average of the Iterates

Now, the most common analysis of SGD can be done in two different ways: constant learning rate and non-increasing learning rate. We already saw both of them in my lecture notes on online learning, so let’s summarize here the one-step inequality for SGD we need:

.
If you plan to use

iterations, you can you use a learning rate

. This is not a convergence results yet, because it just says that on average we are converging. To extract a single solution, we can use Jensen’s inequality and obtain

. In words, we show a convergence guarantee for the average of the iterates of SGD, not for the last one.

Constant learning rates are a bit annoying because they depends on how many iterations you plan to do, theoretically and empirically. So, let’s now take a look at non-increasing learning rates,

. In this case, the correct way to analyze SGD without the bounded assumption is to sum (1) without dividing by

. From this one, we have two alternatives. First, we can observe that

is a minimizer and the learning rate non-increasing. So, using again Jensen’s inequality, we get

Note that if you like these sorts of games, you can even change the learning rate to shave a

factor, but it is probably useless from an applied point of view.

Another possibility is to use a weighted average:

. Note that this option does not seem to give any advantage over the unweighted average above. Also, it weights the first iterations more than the last ones, that in most of the cases is a bad idea: First iterations tend to be farther away from the optimum then the last ones.

Let’s summarize what we have till now:

The last point is a bit concerning: most of the time we take the last iterate of SGD, why we do it if the theory applies to the average?

3. Convergence of the Last Iterate

Actually, we do know that

So, what about unbounded domains and non-increasing learning rate, i.e., 90% of the uses of SGD? It turns out that it is equally simple and I think the proof is also instructive! As surprising as it might sound, not dividing by

(1) is the key ingredient we need. The proof plan is the following: we want to prove that the value of

on the last iterate

is not too far from the value of

. To prove it, we need the following technical lemma on sequences of non-negative numbers multiplied by non-increasing learning rates, whose proof is in the Appendix. This Lemma relates the last element of a sequence of numbers to their average.

a non-increasing sequence of positive numbers and

With the above Lemma, we can prove the following guarantee for the convergence of the last iterate of SGD.

Theorem 2. Assume the stepsizes deterministic and non-increasing. Then

Proof: We use Lemma 1, with

Now, we bound the sum in the r.h.s. of last inequality. Summing (1) from

, we have the following inequality that holds for any

Putting all together, we have the stated bound.

There are a couple of nice tricks in the proof that might be interesting to study carefully. First, we use the fact that one-step inequality in (1) holds for any

. Most of the time, we state it with

from any previous iterate

. Please note that all of this would be hidden in the case of bounded domains, where all the distances are bounded by the diameter of the set, and you don’t get the dependency on

Now we have all the ingredients and we only have to substitute a particular choice of the learning rate.

Now, considering the last term in (3), we have 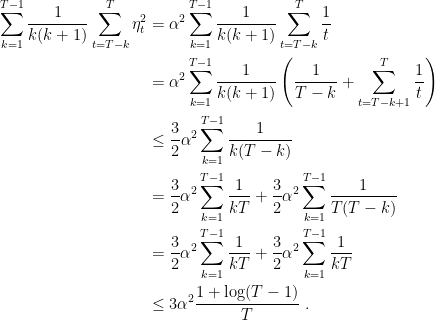 Using (2) and dividing by

Note that the above proof works similarly if

The first finite-time convergence proof for the last iterate of SGD is from (Zhang, T., 2004), where he considered the constant learning rate case. It was later extended in (Shamir, O. and Zhang, T., 2013) for time-varying learning rates but only for bounded domains. The convergence rate for the weighted average in unbounded domains is from (Zhang, T., 2004). The observation that the weighted average is not needed and the plain average works equally well for non-increasing learning rates is from (X. Li and F. Orabona, 2019), where we needed it for the particular case of AdaGrad learning rates. The idea of analyzing SGD without dividing by the learning rate is by  (Zhang, T., 2004). Lemma 1 is new but actually hidden in the the convergence proof of the last iterate of SGD with linear predictors and square losses in (Lin, J. and Rosasco, L. and Zhou, D.-X., 2016), that in turn is based on the one in (Shamir, O. and Zhang, T., 2013). As far as I know, Corollary 3 is new, but please let me know if you happen to know a reference for it! It is possible to remove the logarithmic term in the bound using a different learning rate, but the proof is only for bounded domains (Jain, P. and Nagaraj, D. and Netrapalli, P., 2019).

Exercise 1. Generalize the above proofs to the Stochastic Mirror Descent case.

Exercise 2. Remove the assumption of expected bounded stochastic subgradients and instead assume that

Now, from the definition of

and the above inequality, we have

Unrolling the inequality, we have

Using the definition of

and the fact that