In the last lecture, we have shown a very simple and parameter-free algorithm for Online Convex Optimization (OCO) in 1-dimension. Now, we will see how to reduce OCO in a

-dimensional space to OCO in 1-dimension, so that we can use the parameter-free algorithm given by a coin-betting strategy in any number of dimensions.

We have already seen that it is always possible to decompose an OCO problem over the coordinate and use a different 1-dimensional Online Linear Optimization (OLO) algorithm on each coordinate. In particular, we saw that

is exactly the regret w.r.t. the linear losses constructed by the coordinate

Hence, if we have a 1-dimensional OLO algorithm, we can

copies of it, each one fed with the coordinate

of the subgradient. In particular, we might think to use the KT algorithm over each coordinate. The pseudo-code of this procedure is in Algorithm 1.

The regret bound we get is immediate: We just have to sum the regret over the coordinates.

Theorem 1 With the notation in Algorithm 1, assume that

is a universal constant.

Note that the Theorem above suggests that in high dimensional settings

should be proportional to

2. Parameter-free in Any Norm

The above reductions works only with in a finite dimensional space. Moreover, it gives a dependency on the competitor w.r.t. the

norm that might be undesirable. So, here we present another simple reduction from 1-dimensional OCO to infinite dimensions.

-dimensional (or infinite dimensional) balls. For the 1-dimensional learner, we could use the KT algorithm, while for learning in

-dimensional balls we can use, for example, Online Mirror Descent (OMD). Given these two learners, we decompose the problem of learning a vector

in the problem of learning a direction and a magnitude. The regret of this procedure turns out to be just the sum of the regret of the two learners.

We can formalize this idea in the following Theorem.

the linear regret of algorithm

in the unit ball w.r.t a norm

the linear regret of algorithm 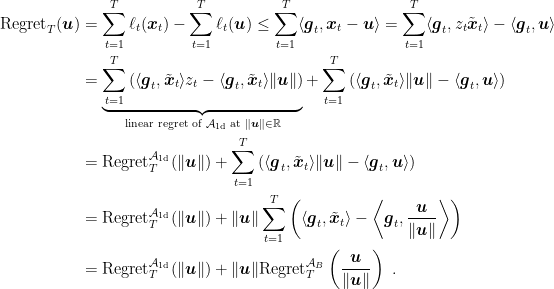 Remark 1 Note that the direction vector is not constrained to have norm equal to 1, yet this does not seem to affect the regret equality.

We can instantiate the above theorem using the KT betting algorithm for the 1d learner and OMD for the direction learner. We obtain the following examples.

the KT algorithm for 1-dimensional OCO with

. Assume the loss functions are

. Then, using the construction in Algorithm 2, we have

Using an online-to-batch conversion, this algorithm is a stochastic gradient descent procedure without learning rates to tune.

To better appreciate this kind of guarantee, let’s take a look at the one of Follow-The-Regularized-Leader (Online Subgradient Descent can be used in unbounded domains only with constant learning rates). With the regularizer

and 1-Lipschitz losses we get a regret of

So, to get the right dependency on

we need to tune

, but we saw this is impossible. On the other hand, the regret in Example 1 suffers from a logarithmic factor, that is the price to pay not to have to tune parameters.

In the same way, we can even have a parameter-free regret bound for

the KT algorithm for 1-dimensional OCO with

. Assume the loss functions are

. Then, using the construction in Algorithm 2, we have

If we want to measure the competitor w.r.t the

norm, we have to use the same method we saw for OMD: Set

. Hence, we have to divide all the losses by

Note that the regret against

of the parameter-free construction is constant. It is important to understand that there is nothing special in the origin: We could translate the prediction by any offset and get a guarantee that treats the offset as the point with constant regret. This is shown in the next Proposition.

an OLO algorithm that predicts

. We have that the regret of the predictions

Finally, we now show a useful application of the parameter-free OCO algorithms property to have a constant regret against

respectively. Then, predicting with

, we have for any

Moreover, if both algorithm guarantee a constant regret of

, we have for any

In words, the above theorem allows us to combine online learning algorithm. If the algorithms we combine have constant regret against the null competitor, then we always get the best of the two guarantees.

Example 3 We can combine two parameter-free OCO algorithms, one that gives a bound that depends on the

norm of competitor/subgradients. The above theorem assures us that we will also get the best guarantee between the two, paying only a constant factor in the regret.

The approach of using a coordinate-wise version of the coin-betting algorithm was proposed in the first paper on parameter-free OLO in (M. Streeter and B. McMahan, 2012). Recently, the same approach with a special coin-betting algorithm was also used for optimization of deep neural networks (Orabona, F. and Tommasi, T., 2017). Theorem 2 is from (A. Cutkosky and F. Orabona, 2018). Note that the original theorem is more general because it works even in Banach spaces. The idea of combining two parameter-free OLO algorithms to obtain the best of the two guarantees is from (A. Cutkosky, 2019).

(Orabona, F. and Pal, D., 2016) proposed a different way to transform a coin-betting algorithm into an OCO algorithm that works in

or even in Hilbert spaces. However, that approach seems to work on for the

norm and it is not a black-box reduction. That said, the reduction in (Orabona, F. and Pal, D., 2016) seems to have a better empirical performance compared to the one in Theorem 2.

are exp-concave. Then, using the Online Newton Step Algorithm, give an algorithm and a regret bound for a game with these losses. Finally, show a wealth guarantee of the corresponding coin-betting strategy.