In the last lecture, we have shown a very simple and parameter-free algorithm for Online Convex Optimization (OCO) in

-dimensions, based on a reduction to a coin-betting problem. Now, we will see how to reduce Learning with Expert Advice (LEA) to betting on

1. Reduction to Learning with Experts

First, remember that the regret we got from Online Mirror Descent (OMD), and similarly for Follow-The-Regularized-Leader (FTRL), is

is the prior distribution on the experts and

is the KL-divergence. As we reasoned in the OCO case, in order to set the learning rate we should know the value of

. If we could set

, we would obtain a regret of

. However, given the adversarial nature of the game, this is impossible. So, as we did in the OCO case, we will show that even this problem can be reduced to betting on a coin, obtaining optimal guarantees with a parameter-free algorithm.

be the number of experts and

be any prior distribution. Let

be a coin-betting algorithm. We will instantiate

be the bet of the

Then, the LEA algorithm predicts

Then, the algorithm receives the reward vector

. Finally, it feeds the reward to each copy of

. The reward for the

The construction above defines a LEA algorithm defined by the predictions

, based on the algorithm

. We can prove the following regret bound for it.

be a coin-betting algorithm that guarantees a wealth after

rounds with initial money equal to 1 of

for any sequence of continuous coin outcomes

. Then, the regret of the LEA algorithm with prior

that predicts at each round with

concave and non-decreasing such that

Proof: We first prove that

The first equality follows from definition of

. To see the second equality, consider two cases: If

are trivially zero. If

From the assumption on

, we have for any sequence

Now, for any competitor 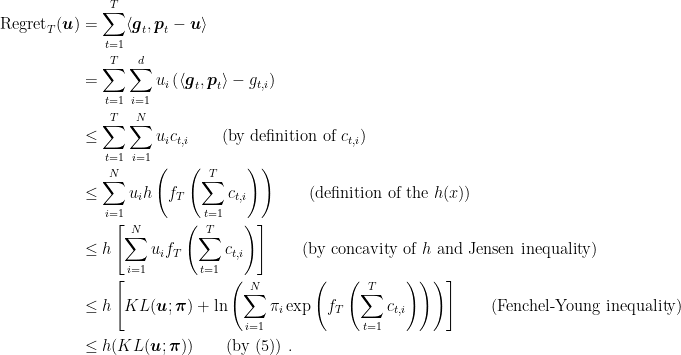 Now, we could think to use the Krichevsky–Trofimov (KT) bettor with this theorem. However, we would obtain a sub-optimal regret guarantee. In fact, remembering the lower bound on the wealth of KT and setting

is a universal constant, we have

. However, it turns out it can be removed. In the next section, we see how to change the KT strategy to obtain the optimal guarantee.

2. A Betting Strategy that Looses at Most a Constant Fraction of Money

In the reduction before, if we use the KT betting strategy we would have a

term under the square root. It turns out that we can avoid that term if we know the number of rounds beforehand. Then, in case

is unknown we can just use a doubling trick, paying only a constant multiplicative factor in the regret.

, the guaranteed wealth becomes proportional to

that goes to infinity the bettor will lose all of its money.

Instead, we need a more conservative strategy that guarantees

small enough and independent of

. In this case, the betting strategy has to pace its betting, possibly with the knowledge of the duration of the game, so that even in the case that the number of heads is equal to the number of tails it will only lose a fraction of its money. At the same time, it will still gain an exponential amount of money when the coin outcomes are biased towards one side.

We will prove that this is possible, designing a new betting strategy.

Hence, we have to prove that (8) is true in order to guarantee a minimum wealth of our betting strategy.

is a concave function of

Also, our choice of

makes the two quantities above equal with

For other choices of

, the two alternatives would be different and the minimum one could always be the one picked by the adversary. Instead, making the two choices worst outcomes equivalent, we minimize the damage of the adversarial choice of the outcomes of the coin. So, we have that 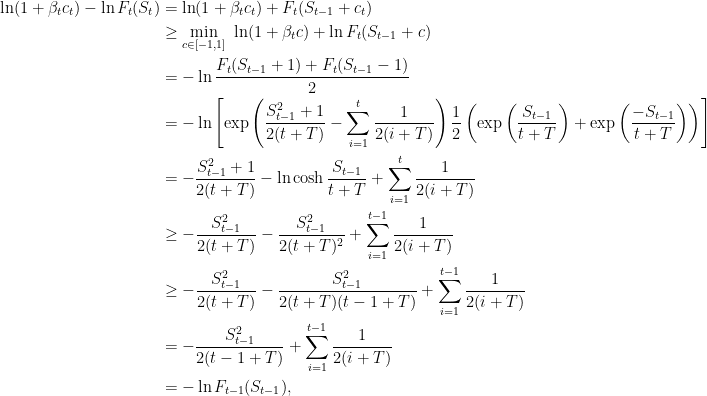 where in the second equality we used the definition of

and in the second inequality we used the fact that

Hence, given that (8) is true, this strategy guarantees

We can now use this betting strategy in the expert reduction in Theorem 1, setting

Note that this betting strategy could also be used in the OCO reduction. Given that we removed the logarithmic term in the exponent, in the 1-dimensional case, we would obtain a regret of

where we gained in the

term inside the logarithmic, instead of the

term of the KT algorithm. This implies that now we can set

and obtain an asymptotic rate of

The first parameter-free algorithm for experts is from (Chaudhuri, K. and Freund, Y. and Hsu, D. J., 2009), named NormalHedge, where they obtained a bound similar to the one in (9) but with an additional

term. Then, (Chernov, A. and Vovk, V., 2010) removed the log factors with an update without a closed form. (Orabona, F. and Pal, D., 2016) showed that this guarantee can be efficiently obtained through the novel reduction to coin-betting in Theorem 1. Later, these kind of regret guarantees were improved to depend on the sum of the squared losses rather than on time, but with an additional

Exercise 1 Using the same proof technique in the lecture, find a betting strategy whose wealth depends on