Basically, we want to guess a sequence of numbers as precisely as possible. To be a game, we now have to decide what is the “winning condition”. Let’s see what makes sense to consider as winning condition.

First, let’s simplify a bit the game. Let’s assume that the adversary is drawing the numbers i.i.d. from some fixed distribution over

or equivalently considering the average

Clearly these quantities are positive and they seem to be a good measure, because they are somehow normalized with respect to the “difficulty” of the numbers generated by the adversary, through the variance of the distribution. It is not the only possible choice to measure our “success”, but for sure it is a reasonable one. It would make sense to consider a strategy “successful” if the difference in (1) grows sublinearly over time and equivalently if the difference in (2) goes to zero as the number of rounds

goes to infinity. That is, on average on the number of rounds, I would like my algorithm to be able to approach the optimal performance.

Minimizing Regret. Given that we have converged to what it seems a good measure of success of the algorithm. Let’s now rewrite (1) in an equivalent way

Now, the last step: remove the assumption on how the data is generated, just consider any arbitrary sequence of

and keep using the same measure of success. Of course, we can remove the expectation because there is no stochasticity anymore. So, we get that we will win the game if

. The quantity above is called the Regret, because measures how much the algorithm regrets for not sticking on all the rounds to the optimal choice in hindsight. We will denote it by

. Our reasoning should provide sufficient justification for this metric, however in the following we will see that this also makes sense from both a convex optimization and machine learning point of view.

Let’s generalize it a bit more, considering that the algorithm outputs a vector in

and it pays a loss

that measures how good was the prediction of the algorithm in each round. Also, let’s consider an arbitrary predictor

and let’s parameterize the regret with respect to it:

. So, to summarize, Online Learning is nothing else than designing and analyzing algorithms to minimize the Regret over a sequence of loss functions with respect to an arbitrary competitor

This framework is pretty powerful, and it allows to reformulate a bunch of different problems in machine learning and optimization as similar games. More in general, with the regret framework we can analyze situations in which the data are not i.i.d. from a distribution, yet I would like to guarantee that the algorithm is “learning” something. For example, online learning can be used to analyze

It can also be used to analyze stochastic algorithms, e.g., Stochastic Gradient Descent, but the adversarial nature of the analysis might give you suboptimal results. For example, it can be used to analyze momentum algorithms, but the adversarial nature of the losses essentially forces you to prove a convergence guarantee that treats the momentum term as a vanishing disturbance that does not help the algorithm in any way.

Let’s now go back to our number guessing game and let’s try a strategy to win it. Of course, this is one of the simplest example of online learning, without a real application. Yet, going through it we will uncover most of the key ingredients in online learning algorithms and their analysis.

A Winning Strategy. Can we win the number guessing name game? Note that we didn’t assume anything on how the adversary is deciding the numbers. In fact, the numbers can be generated in any way, even in an adaptive way based on our strategy. Indeed, they can be chosen adversarially, that is explicitly trying to make us lose the game. This is why we call the mechanism generating the number the adversary.

The fact that the numbers are adversarially chosen means that we can immediately rule out any strategy based on some statistical modelling on the data. In fact, it cannot work because the moment we estimate something and act on our estimate, the adversary can immediately change the way he is generating the data, ruining us. So, we have to think about something else. Yet, many times online learning algorithms will look like classic ones from statistical estimation, even if they work for different reasons.

Now, let’s try to design a strategy to make the regret provably sublinear in time, regardless of how the adversary chooses the numbers. The first thing to do is to take a look at the best strategy in hindsight, that is argmin of the second term of the regret. It should be immediate to see that

Now, given that we don’t know the future, for sure we cannot use

as our guess in each round. However, we do know the past, so a reasonable strategy in each round is to guess the best number over the past. Why such strategy would work? For sure, the reason why it could work is not because we expect the future to be like the past, because it is not true! Instead, we want to leverage the fact that the optimal guess should not change too much between rounds, so we can try to “track” it over time.

Hence, on each round

our strategy is to guess

. Such strategy is usually called Follow-the-Leader (FTL), because you are following what would have been the optimal thing to do on the past rounds (the Leader).

Let’s now try to show that indeed this strategy will allow us to win the game. We will use first principles and later introduce general proof methods. First, we will need a small lemma.

an arbitrary sequence of loss functions. Denote by

a minimizer of the cumulative losses over the previous

rounds. Then, we have

Proof: We prove it by induction over

. The base case is

that is trivially true. Now, for

is true and we must prove the stated inequality, that is

This inequality is equivalent to

where we removed the last element of the sums because they are the same. Now observe that

by induction hypothesis, and

is a minimizer of the left hand side. Chaining these two inequalities, we have that (3) is true, and so the theorem is proven.

With this lemma, we can now prove that the regret will grow sublinearly, it particular it will be logarithmic in time. Note that we will not prove that our strategy is minimax optimal, even if it is possible to show that the logarithmic dependency on time is unavoidable for this problem.

an arbitrary sequence of numbers. Let the algorithm’s output

Proof: We use Lemma 1 to upper bound the regret:

Now, let’s take a look at each difference in the sum in the last equation. We have that 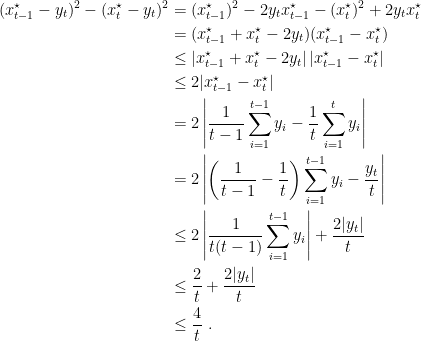 Hence, overall we have

For the upper bound the last sum, observe that we are trying to find an upper bound to the green area in Figure 1. As you can see from the picture, it can be upper bounded by 1 plus the integral of

There are few of things to stress on this strategy. The strategy does not have parameters to tune (e.g. learning rates, regularizers). Note that the presence of parameters does not make sense in online learning: We have only one stream of data and we cannot run our algorithm over it multiple times to select the best parameter! Also, it does not need to maintain a complete record of the past, but only a “summary” of it, through the running average. This gives a computationally efficient algorithm. When we design online learning algorithms, we will strive to achieve all these characteristics. Last thing that I want to stress is that the algorithm does not use gradients: Gradients are useful and we will use them a lot, but they don’t constitute the entire world of online optimization.

Before going on I want to remind you that, as seen above, this is different from the classic setting in statistical machine learning. So, for example, “overfitting” has absolutely no meaning here. Same for “generalization gap” and similar ideas linked to a training/testing scenario.

In the next lectures, we will introduce our first algorithm for online optimization for convex losses: Online Gradient Descent.

, the algorithm guesses a vector

, and the loss function is

. Show an upper bound to the regret that is logarithmic in

. Among the other things, you will probably need the Cauchy–Schwarz inequality: