Today, we will consider the stochastic bandit setting. Here, each arm is associated with an unknown probability distribution. At each time step, the algorithm selects one arm

and it receives a loss (or reward)

drawn i.i.d. from the distribution of the arm

where we denoted by

the expectation of the distribution associated with the arm

Remark 1 The usual notation in the stochastic bandit literature is to consider rewards instead of losses. Instead, to keep our notation coherent with the OCO literature, we will consider losses. The two things are completely equivalent up to a multiplication by

Before presenting our first algorithm for stochastic bandits, we will introduce some basic notions on concentration inequalities that will be useful in our definitions and proofs.

. The most natural estimator is the empirical mean

Linearity of expectation shows that

is an unbiased estimator of

is a random variable itself. So, can we quantify how far

Using the fact that

So, we can expect the probability of having a “bad” estimate to go to zero as one over the number of samples in our empirical mean. Is this the best we can get? To understand what we can hope for, let’s take a look at the central limit theorem.

We know that, defining

, the standard Gaussian distribution, as

goes to infinity. This means that

where the approximation comes from the central limit theorem. The integral cannot be calculated with a closed form, but we can easily upper bound it. Indeed, for

This is better than what we got with Chebyshev’s inequality and we would like to obtain an exact bound with a similar asymptotic rate. To do that, we will focus our attention on subgaussian random variables.

Definition 1 We say that a random variable is

We have the following properties for subgaussian random variables.

. To prove it, let’s first state the Markov’s inequality.

With Markov’s inequality, we can now formalize the above statement on subgaussian random variables.

Theorem 4 If a random variable is

Minimizing the right hand side of the inequality w.r.t.

, we have the stated result.

An easy consequence of the above theorem is that the empirical average of subgaussian random variables concentrates around its expectation, with the same asymptotic rate in (1).

-subgaussian random variables. Then, for any

Equating the upper bounds on the r.h.s. of the inequalities in the Corollary to

, we have the equivalent statement that, with probability at least 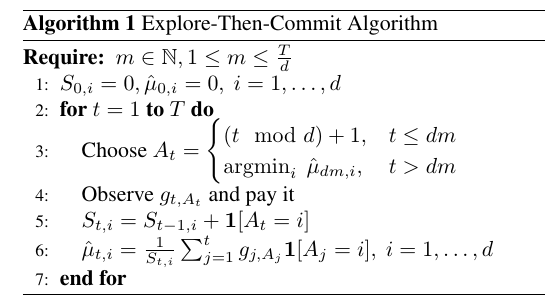 We are now ready to present the most natural algorithm for the stochastic bandit setting, called Explore-Then-Commit (ETC) algorithm. That is, we first identify the best arm over

exploration rounds and then we commit to it. This algorithm is summarized in Algorithm 2.

In the following, we will denote by

, that is the number of times that the arm

was pulled in the first

the expected loss of the arm with the smallest expectation, that is

. Critical quantities in our analysis will be the gaps,

, that measure the expected difference in losses between the arms and the optimal one. In particular, we can decompose the regret as a sum over the arms of the expected number of times we pull an arm multiplied by its gap.

Lemma 6 For any policy of selection of the arms, the regret is upper bounded by

The above Lemma quantifies the intuition that in order to have a small regret we have to select the suboptimal arms less often then the best one.

We are now ready to prove the regret guarantee of the ETC algorithm.

. Then, ETC guarantees a regret of

Proof: Let’s assume without loss of generality that the optimal arm is the first one.

From Lemma 2, we have that

-subgaussian. So, from Theorem 4, we have

The bound shows the trade-off between exploration and exploitation: if

is too big, we pay too much during the exploration phase (first term in the bound). On the other hand, if

is small, the probability to select a suboptimal arm increases (second term in the bound). Knowing all the gaps

, it is possible to choose

that minimizes the bound.

For example, in that case that

, the regret is upper bounded by

that is minimized by

must be a natural number we can choose

. Hence, the regret is upper bounded by

. Assuming the knowledge of the gaps account to make the stochastic bandit problem completely trivial. However, its tuned regret bound gives us a baseline to which compare other bandit algorithms. In particular, in the next lecture we will present an algorithm that achieves the same asymptotic regret without any knowledge of the gaps.